Profit with Trade Up Contracts in CS:GO!

We show you how to use the CS:GO Trade Up Contract correctly! We've the best tool and very important information for you!

Now we'll show you the best trade ups for free. If you already know how our great tool works:

Hello, I want to show you how you use the Trade Up Contract in a profitable way.

First of all, you need to know how the Trade Up Contract exactly works. In general, this isn't as complicated as you might think. Basically, the Trade Up Contract is a tool in Counter-Strike: Global Offensive that requires 10 skins of the same rarity. If you want to know how to make profit using it, just follow the guide. In general, I recommend you to follow the guide to the end. I provide you information that you can help you to get advanced when it comes to the CSGO Trade Up Contract.
The trick is: Your input value needs to be lower than the value of the skin you get out of it. Usually, its a gamble f.e. you can make profit with a good skin, but if you get the bad skin you lose money (f.e. in a 50%/50% trade up).

In case you have problems with a term, feel free to check out the FAQ. If you're new to Trade Up Contracts you can stay - otherwise, you should go on to the NEXT STEP.

Here you can see how the Trade Up Contract works basically. (28 seconds)

In the next step, I show you how to use our tool efficiently.

Generally, my tool gives you free access to an algorithm that calculates (24/7) the best trade ups. But now I will show you an example how a result of our algorithm could look like: 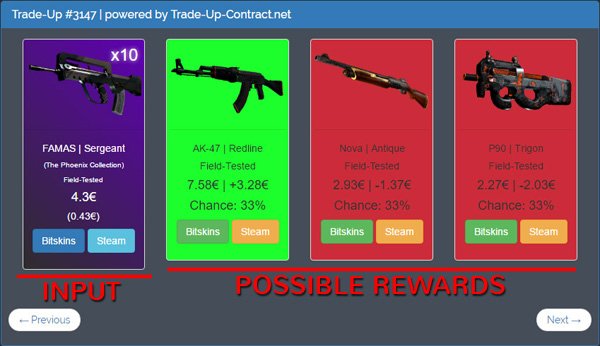 The first box is the input that you have to buy when you want to do this trade up. The color of this box represents the rarity of the input. Additionally, there are information about skin, collection, prices and a direct link to Steam. Remember: You'll get a reward that is one grade higher than the input.

In the next boxes, you can see the possible rewards if you do this trade up with its skin, condition, price, profit/loss and chance. In this case, you can get three skin with a chance of 33.33% each. Boxes with a green background let you make profit while boxes with a red background mean loss. With "Next" and "Previous" you have the option to look at other possible trade ups. Notice please that the algorithm tries to present you the best trade ups first. Example: When you put 10x "FAMAS | Sergeant" into the Trade Up Contract, you receive an "AK-47 | Redline", a "Nova | Antique" or a "P90 | Trigon" with 33.33% each. When you get the AK-47, you make profit - otherwise, you would do loss.

Now I explain you something more difficult. But after reading this, you'll be able to recheck trade ups to get sure that it works.

The Trade Up Contract just uses this formula to calculate the float value of the reward: (maxFloat - minFloat) x AVG + minFloat AVG = Average of your input (10 skins) minFloat = minFloat of possible reward maxFloat = maxFloat of possible reward Regarding this formula, sometimes it can happen that you get appreciated reward but with a worse condition than expected. This is because your reward has a high minFloat. If you want to know the required average, you can use THIS WEBSITE. In conclusion, you should recheck every trade up on the range of float values because otherwise, you may get a worse condition than you expected. To get the minFloat & maxFloat of an item you can use THIS WEBSITE. "Field-Tested" and "Battle-Scarred" trade ups usually are safer because they have a larger float value range representing its condition. Don't be afraid. Our algorithm considers this problem so I show you only trade ups where the rewards have a low minFloat.

How easy you can start:

We've developed a great tool that you can use to find the best possible trade ups in CS:GO. Prices & other factors are always up-to-date so you will always get high-quality results.

We offer you the best tool and very important information - FOR FREE!

Our website is very useful. Use them to make profit using the Trade Up Contract in CS:GO!

The best thing is that our services are completely free. You don't have to pay anything for it.

The Trade Up Contract is a tool in CS:GO that player can use to upgrade ten (10) of their weapons to one (1) item with a higher rarity.

That's how a typical course of action could be: